All You Need to Know About Estoppel 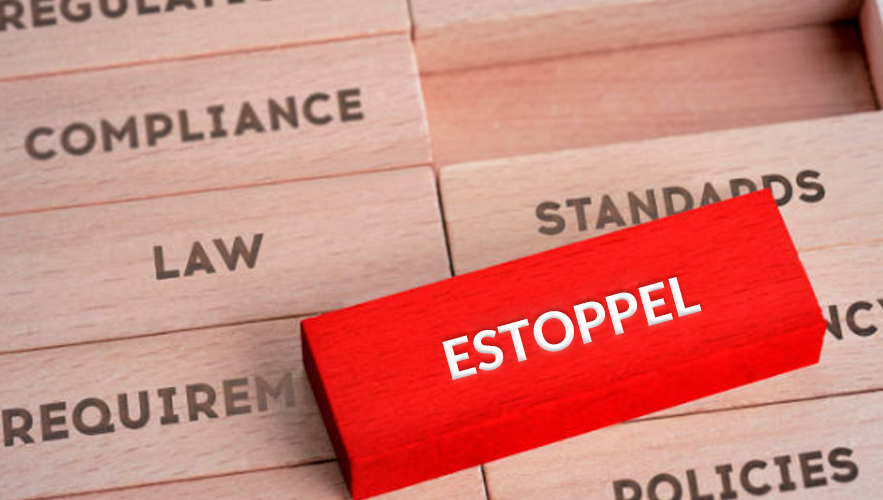 When performing the required due diligence in a commercial real estate deal, just before a contract is signed, one of the legal terms, estoppel, comes into the picture.

To ensure that your real estate contract and conditions are taken seriously, it is important to understand what estoppel is, how it affects property deals, its types, components, and more.

This blog will cover all you need to know about estoppel in the context of a commercial real estate deal.

What is an Estoppel?

An estoppel certificate refers to a letter or statement agreed upon by a tenant or landlord that a commercial lease agreement with all its stated clauses exists.

It acts as proof that facts stated in the lease agreement are valid, that no defaults exist, and that both parties are obligated to abide by the terms and conditions mentioned in the agreement.

In commercial real estate deals, an estoppel certificate is used to prevent a tenant or landlord from going back on their promise or word.

For example, if in a real estate contract, a landlord confirms not to terminate a tenant’s lease till the time tenant is spending money on the upkeep of the property, an estoppel certificate could prevent the landlord from going back on their promise and terminating the lease, even when the same is not documented in writing as a contract.

How an Estoppel Works

When you are trying to buy a property from a landlord, you need to do your due diligence using the tenant estoppel certificate. It helps you ensure that the lease terms are right and the instances of outstanding liabilities and expenses are minimal.

A signed tenant estoppel certificate works by holding your landlord obligated to this agreement. It also clears your doubts as a buyer/leaser about the proper enforceable clauses of the lease.

Besides, an estoppel certificate highlights if either party has defaulted any responsibility or right under the lease tenure and contains detailed information on existing renewals or extensions.

The most common types of estoppel are as follows:

Components of an Estoppel Certificate

Typically, an estoppel certificate outlines the type of commercial lease in question, clarifies any amendments, and states that no further modifications can be made.

Although the items listed in estoppel documents vary, some of the common components present in them are as follows:

Example of an Estoppel

Here is an example of the kind of language used in an estoppel certificate in commercial lease contracts:

A tenant under the lease contract, upon written request by Lender, delivers this estoppel letter in writing stating:

(i) Lease is in full force and effect without any modifications

(ii) In case of any modifications in the lease, identifying such changes and clearly certifying that the modified Lease is in full effect

(iv) Landlord or Lender is not in default of this Lease

(v) Address to which all notices to Tenant shall be sent

If such a statement is failed to be delivered by the tenant within such time, it will be conclusive to the Tenant that:

(ii) There are no defaults by Lender or Landlord

An estoppel letter or certificate is a legal statement signed by a tenant (and landlord) that a commercial lease agreement exists and outlines that specific facts of the agreement are valid,  that there are no defaults, and that they agree to pay rent on a particular date to the landlord.

An estoppel certificate is often required in rental agreements. So a tenant who refuses to return the agreement can be in breach of the lease terms they signed.

If the tenant does not return the estoppel document by the deadline, some leases allow a landlord to:

The main purpose of it is to provide third-party insights into the relationship between a landlord and a tenant.

Automate Your Lease Management With LeasO

If you're in the business of leasing, it is best to use robust lease management software. It makes everything from rent tracking, manual payment renewals, and invoice creation much simpler, faster, and more accurate.

Leveraging lease management software like LeasO allows you to handle all your lease expenses effectively, thus saving more time for you to focus on other strategic business tasks.